Free Shipping when you spend $90.

Is this really the end for big pharma Finally?

The battlefield was set amongst those that have political prowess and those that are simple victims of addiction served with a dose of Marketing. Oxycodone was hailed as a champion drug when released in the Unites States as an alternative to Morphine or other Codeine based medications. This sincere lie has unfolded in the eyes of the media but with little real effect or remedy. The Sackler family who owns Purdue Pharma maybe embattled in one of the costliest public lawsuits but, who are the real winners and losers in this? As of recent political times, the private financial backing of Pharmaceutical companies and campaigns have come under intense scrutiny. This is where the juxtaposition of health and profit draw a fine veil that separates the need for one of the greed of another.

The Sackler Family have been the powerhouse behind Purdue Pharma and one of the most profitable and well-known pharmaceuticals made by them is; Oxycodone. The family has been accused of falsely Marketing and buying influence within the medical sphere with benefits and perks to those that prescribed the fatal drug. The rise and misuse and diagnosis of Oxycodone is highly documented within America and, is known as a drug that does not discriminate based on colour, breed or core in terms of addiction.

DOJ failed. Justice in this case requires exposing the truth and holding the perpetrators accountable, not rushing a settlement to beat an election. I am not done with Purdue and the Sacklers, and I will never sell out the families who have been calling for justice for so long. https://t.co/M2NJ2DvcSr

Purdue Pharma was served with Civil and Legal proceedings pertaining to over 2,800 cases that spread across two dozen States in America. In conjunction to this order, Purdue Pharma proceeded to ask for clemency in the term of Bankruptcy Protection, in order to stall criminal proceedings brought towards them. The walls of criminal prosecution were closing in, and for once it felt as if those voices that were silence or stolen at such a young age would have the chance to be heard. Instead, the lawyers representing the Sackler family insisted that although over USD $10 billion had been cyphered into subsidiary companies during the period of 2008 to 2017 they were “paid in taxes and reinvested in businesses that will be sold as part of proposed settlement”. The Slackers’ once again insist they are only doing the best for their clientele when in reality it is their shareholders.  But to dive into the complexity of how a Pharma giant known for exploitation is still not only is able to trade but do so with a pardon from the United States, opens a disturbing pattern all too familiar. 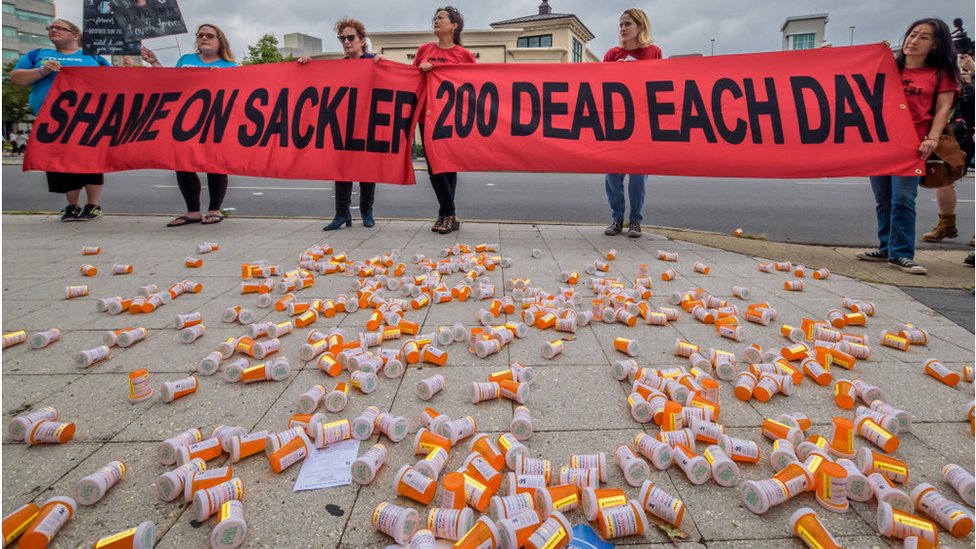 Oxycodone and more so its sale under the guise of the Sackler family, left over 200,000 users dead and alone. These numbers have been slowly been accumulating since 1999 but no criminal proceedings or change has been brought against this juggernaut. Purdue Pharma plead guilty to enabling the supply of prescription medication “without legitimate medical purpose”. Talking in front of the Department of Justice in their case, Steve Miller, former chair, even admits “Purdue deeply regrets and accepts responsibility for the misconduct detailed”. But admitting regret, does not bring back those whose lives were cut short all in the name of a profit margin. The case against Purdue Pharma concluded in three criminal charges and fines for the company of USD $8.3million, the largest in any civil lawsuit. The real conundrum comes with the scenario is, does Purdue Pharma actually face any real problems moving forward?

Just as so many others before them, such as James Hardie and the consequences that Asbestos had, will Purdue Pharma actually take a hit? As a company it has been given a clear pass by the American Pharmaceutical Industry and Governance that the product, they produce is vital, so in theory the demand will remain. The devil is in the detail. Instead of looking for alternatives to modern Pharmaceuticals, we are not only letting us destroy ourselves but also financially making them viable and ultimately successful. The Saclkers maybe the most hated family in America at the moment, with their hands shedding the blood of over 200,000 souls, but that is today. It is only a matter of time that these types of disasters keep occurring. Governance between Pharmaceutical, Government and profit must be kept separate. Until society can stand, understand and work together, large corporations and families will continue to make profit killing off many to gain money for themselves. Alternative solutions are out there but unfortunately, without the backing of big Pharmaceuticals, their presence will be rejected in favour of one more profitable.